Task 1: Complete these similes below describing your friend.

Students will play this game to revise the concept of area and perimeter:

Note: FA notebook and evidence for the unit ‘Exploration’ has been sent. Kindly go through and send them back tomorrow.

A gentle reminder to send extra pair of clothes for the P.E adventure activity which is going to be done tomorrow.Ignore if already sent.

UOI: Learners started with a discussion about Friday’s food experience and they derived that they could empathize the situation of underprivileged children better through the experiences. Later, they shared their thoughts and feelings on ‘Empathy’ chart. Poverty, neglect and racial difference are few of the challenges, risks and opportunities encountered by the children. Learners continued to research about a range of challenges, risks and opportunities. For the same, they watched videos -Safe place, the boy who hates his disabled dog and Unfairy tales (pillow) . The link of the playlist is stated as below. Post watching the videos, they noted: “I see, I know, I feel, I think and I wonder.”

Math: Learners explored the relationship between area and perimeter using the rangometry. They derived that area can be larger than perimeter and vice versa. Also, that for the same area, different shapes can be created and perimeter may vary.  They were given 28 pieces of rangometry and were asked to create rectangular or square shape and note the length, breadth, perimeter and area.

Further discussion of the tuning in activity was done.

Complete the given worksheet.

Students used rang-o-metri to understand the relationship between area and perimeter.

They constructed different shapes using only 28 cubes and calculated the area and perimeter of each shape.

UOI: (to be done in UOI notebook)

Choose any one of the stories and read using the link : https://drive.google.com/a/fountainheadschools.org/file/d/0Bxny1PnzFMlfVWs0OVkxRERwdDg/view?usp=sharing

or Read the story given below: (Challenge: Be courageous enough to read both of the stories and reflect on it)

‘I had no future. My education was on the sewing machine’
Mohamed Hajy, from Syria

When 15-year-old Mohamed Hajy tried to reach Greece by boat earlier this month, he nearly drowned. The inflatable boat he shared with 39 other desperate Syrians began to deflate, still a mile from Greek shores, and he was saved from death only at the last minute by a charity-run rescue boat. Had the rescuers arrived a few moments later, they might all have ended up in the icy water. Most of them couldn’t swim – and were wearing fake lifejackets that wouldn’t have saved them.

This was, nevertheless, scarcely worse a fate than the one he’s fleeing from, Hajy says later. In Syria, he was caught between being conscripted into the Syrian army and the advances of Islamic State. In Turkey, where he fled to first, he was forced into child labour in order to survive. 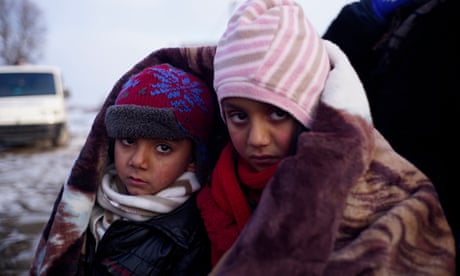 Britain ‘poised to open door to thousands of migrant children’

Safely aboard the rescue boat, Hajy holds up a video of himself in a factory, hard at work on a sewing machine. “I was just doing this every day for 14 hours a day,” he says, “with a boss going, ‘Faster, faster.’” He earned just $300 a month, barely enough for rent.

All of this was in contravention of the UN’s convention on the rights of the child, giving Hajy ample legal reason to seek a better life elsewhere. Denied his rights in Turkey and Syria, travelling to Europe was therefore an easy choice – even though it meant risking death off the Greek coast, and doing so with no adult to look after him.

“In Turkey, I had no future,” Hajy says. “Life was awful. My education was on the sewing machine. And I did not want to be doing that for the rest of my life.”

Hajy is not unique. In Turkey, he was one of 400,000 school-age Syrian refugees in Turkey who had no access to school – a dynamic that rights workers say will drive still more of them to take their chances at sea.

“Failing to provide Syrian children with education puts an entire generation at risk,” Human Rights Watch said in a report on the subject last November. “With no real hope for a better future, desperate Syrian refugees may end up putting their lives on the line to return to Syria or take dangerous journeys to Europe.” Mohamed Hajy is living proof of that. Patrick Kingsley

Quote of the day:

Homework especially weekend homework which includes mixed bag(revision) worksheets are to be checked by student first i.e. self-check. Later on, by the parent and sign it.
Purpose: Parent will come to know in which topic their child needs frequent revision and can help them in revisiting the topic.
Teachers will not check mixed bag worksheets from now onwards. Only brief verification will be done.
Seeking your cooperation.

Students understood the relationship between area and perimeter through a hands-on engagement.

Students have to write one alliteration poem and one onomatopoeia poem in their Language E.E notebook. (Minimum 5-6 lines each)

Note: FA notebook and evidence for the unit ‘Exploration’ has been sent. Kindly go through and send them back tomorrow.

Language: Students were introduced to 6 traits of writing using the following video:

Then, the task from the Chapter Upgrading Goldilocks, from Empowering English was done in groups. The feedback for the same was given in the class and the students, in groups published the same on the Google document shared by the teacher.

Later, the writing process was discussed with the students through the following video and image :

after which students wrote a piece independently on the topic: ‘My summer vacation’, keeping in mind  the following:

UOI:  A prior knowledge test for the new unit ‘How the world works’ was done in the class, in which students were shown few pictures and they had to answer questions related to the pictures, in their UOI notebook. The answers were then discussed by the teacher.

Then, a Rube Goldberg model video was shown to the students after which they created a mini Rube Goldberg, in groups. A class discussion on the same was taken by the teacher.

Later, the Lines of Inquiry of the unit were discussed through a center activity.

The teacher then wrote the word ‘Force’on the board and asked students to share their understanding of the same. Once done, the scientific definition of ‘Force’ was given. Next, students had to search and write the definitions of few scientific terms related to the unit, in a worksheet given to them.

Math: Ordering and addition of integers was discussed through hands-on activities as well as by solving sums on the board and in the Math notebook.

Start preparing for the 1st round of the Literary Event (Elocution) on the topic of your choice.